Natural HPP, in Saint-Hyacinthe, Quebec, near Montreal, started operations in June 2011 and remains the first and only HPP toller in Canada with federal approvals for proteins, seafood, and produce. Tollers are contract processors who HPP treat products for a range of customers.

Essentially “writing the book” on high pressure processing in Canada, Natural HPP was instrumental in the deregulation of HPP in Canada, helping remove it from the “Novel Food” regulation category for most applications effective April 1, 2016. Working closely with Health Canada food specialists over a four-year period, Natural HPP helped moved HPP into the mainstream, which means major savings at every level from the food producer using HPP to the consumer enjoying HPP-treated products. 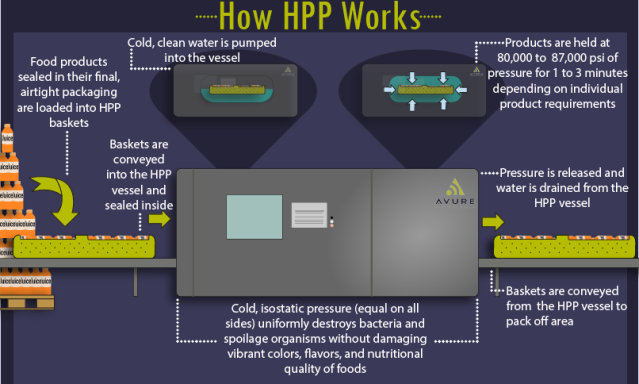 World leading
With so much experience, it’s no wonder that Natural HPP has become the epitome of efficiency as an HPP toller.

Among Natural HPP’s equipment is a JBT/Avure AV-10, which serves as a testament to their rigorous maintenance program as well as the sturdiness of JBT/Avure equipment. Their AV-10 has seen more than 215,000 cycles, more than almost any other AV-10 in operation, and it’s still going strong.

Natural HPP has an extensive HACCP program under Canadian Federal regulation and boasts an SQF-II score of 96%. Auditors from the Subway sandwich chain have dubbed Natural HPP “ the best HPP plant around the world.”

For more information about Natural HPP, check out their website.